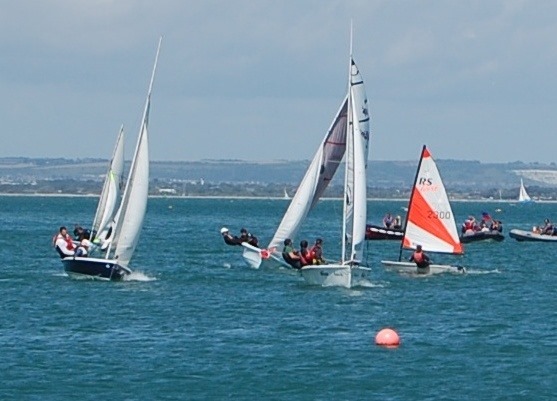 Last Saturday's rescheduled cadet regatta was postponed from June, when gale force winds put a stop to any sailing. On Saturday morning, there was some doubt that even this event would happen but the race officer and his team decided on an all-class race up Wootton Creek, round the club mark and a further lap.

The gusty conditions gave some exciting sailing to those on the water and those on shore watching. The course gave viewers a great view of the racing, leading to a request for more Creek races from the club.

Simon Evans and his young crew, Wilf and George, soon found how exciting the club's newly-donated Topper Omega was, as well as very wet. David Vrba helmed the club Wayfarer, crewed by eight year olds Elliot and Meghan. The Wayfarer led for most of the race and was first across the line but on corrected time, it was Noah and Finn Evans in their Oppies who took first and second places, with Charlotte Andrews and Charlotte Osborne third, Alice Pope (Oppie) fourth, and the Wayfarer fifth.

Everyone had a great afternoon's racing and learnt some lessons and skills about the amount of sail for the gusty conditions and how tactics come into play when racing in the Creek!

Presentations were held after racing, with everyone getting an OnBoard medal and certificate and stayed for a family post-race BBQ. Thanks to Tim Blake for being BBQ king for the afternoon.