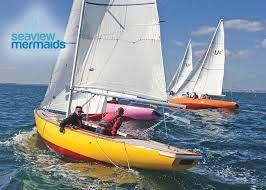 It was all decided on the last 2 marks of the last 3rd race, on a windy F4 day, in a choppy sea with a conflicted wave pattern.

SVYC's leading boat came and attacked the RVYC dark Green Mermaid (Chris Gear, Harry and Charlie White) and luffed them away from their down wind course towards the wrong side of the mark. This allowed 2 RVYC and 2 SVYC boats to catch up.

As soon as the first 5 boats had rounded the mark, the SVYC boat luffed 4 boats up head to wind from their reach course. Parked, rafted up inches from each other, in a choppy sea there was plenty of yelling of rules.

The leeward mark was equally frantic but the SVYC won with a 1st 3rd 4th combination.

RVYC had raced tactically well beating the Royal London YC in a close finish on the last leg and the East Wight Combined clubs of which 2 Mermaids which were helmed by Dave Hirst and Tom White from RVYC) resulting in a worthy 2nd overall.

Ross Owen, Phil Russell, James O'Callaghan, Chris Matthews and Guy Scott made up the rest of the RVYC team.