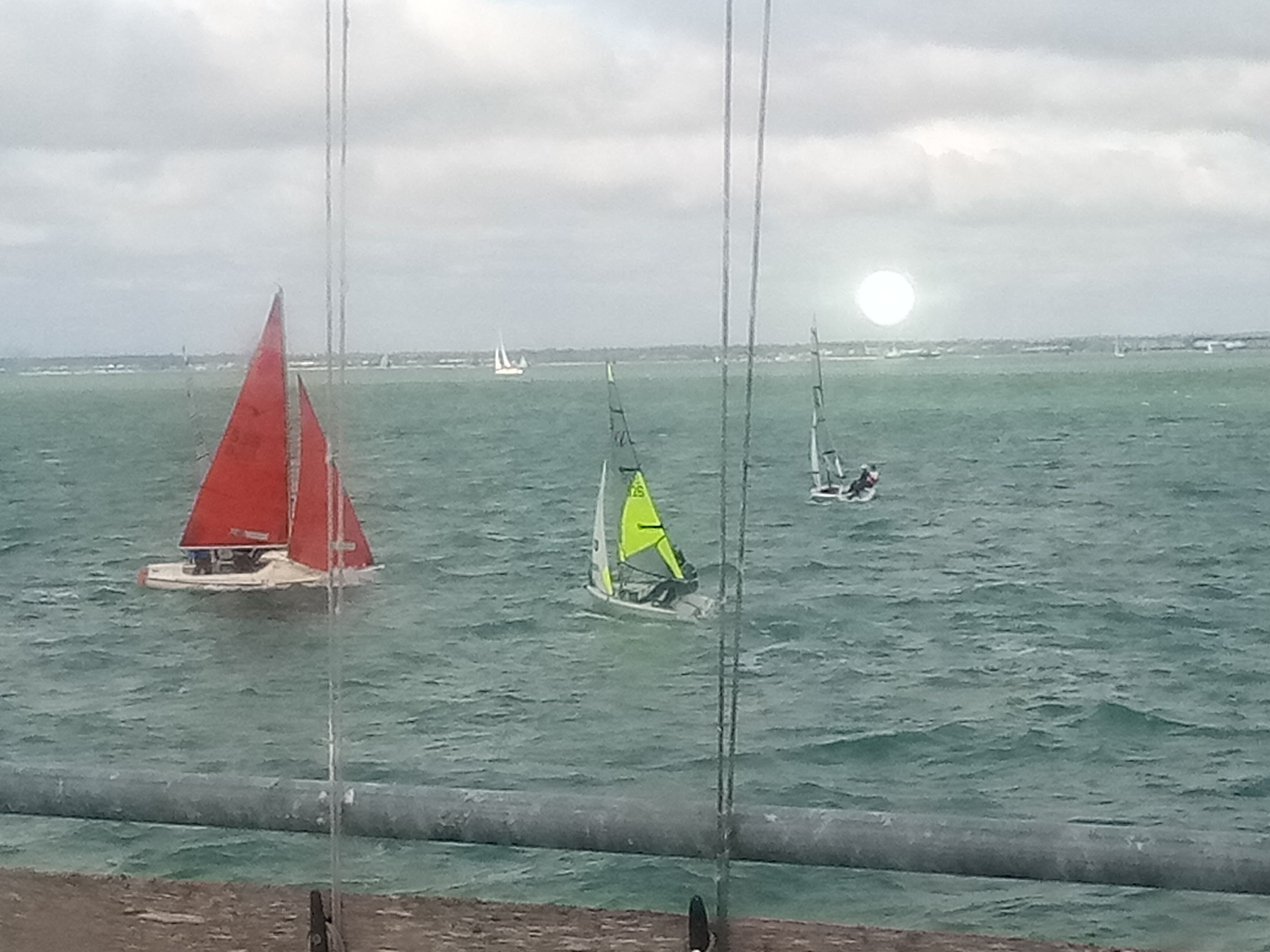 It is not often that cruising yacht is on the same start line as a Pico dinghy, but the annual Barrel Race at the Royal Vic had all the classes together and all doing the same course.

A one hour time limit and each boat doing as many laps as they could in the time the winner on handicap using their average lap time.

The race team kept it simple with a windward leeward course, and as it was a freshening breeze from the North, it gave the competitors a nice clean beat out into the Solent. The 14 knot gusts on the downwind made the timings of the gybes a winning move for some, and a swim for others.

The fleet got away cleanly at the start, the RS 400s and the Squibs fighting for the pin end the cruiser Elsa, Chris Turner sailing single handed, courteously allowing the smaller boats to scatter before elegantly setting his course for the first mark. I am sure we could smell Sunday lunch coming from the galley as she passed the race box on the downwind leg. First to the mark were the RS400s of Chris Andrews and Steve Sheriden, closely followed by Sam Prime and Emma Baker, Mark Irons in his RS 100 was looking good in third, but would he risk all and raise the spinnaker. The Squibs then processed around the buoy, It was close, Rhapsody, Osprey, Kestrel, Sequel and Liz Whiz in close formation, Osprey showed the fleet how to hoist the spinnaker, but in spite of the creative display of sail cloth origami hanging from Rhapsody's mast, they managed to hang on to the lead downwind. Meanwhile the RS100 lost the battle to stay upright, it was brief but exciting, and ended up with a long swim and an early shower. The slowest boat in the fleet, the Pico sailed by the determined Sandra Brown, had impressively managed to round the leeward mark and was closing with the line to finish a lap when an RS 400 hurtled towards her on starboard. There was a moment of hope, tack or duck, sadly the moment passed and the Pico made the decision to capsize instead. Yards from the line, a second from success, disaster, the mast dropped out and it was game over. The RS 400 was oblivious, but the wind had other plans and managed to cause each of them to suffer multiple capsizes. The lead between them alternated, but Chris and Steve suffered one fewer knockdowns so crossed the line ahead. What of the Laser 2000 ? The race team realised that in spite of a promising start it had not been seen since Katie Andrews on the race box tracked it down on the eastern horizon, they had not realised that going through the line on each lap had been necessary so only recorded 2 laps the whole race. Kestrel and Incognito also missed the line , but Kestrel realised after 100 metres and corrected the error, losing a couple of places as a penalty. Incognito remained oblivious. The RS Feva carried on, and on, four laps in 56 minutes, consistent and competently sailed by the two Charlottes, Andrews and Osborne. They just missed a podium place coming 4th overall, but the first of the dinghies, a great result. The first three places were taken by the Squibs, Rhapsody, Osprey and Sequel. The Commodore awarded the case of beer to the winner Steve Warren-Smith, who then generously shared the prize with all competitors and race volunteers at the clubhouse. Another great day on the water, as well as back on land.