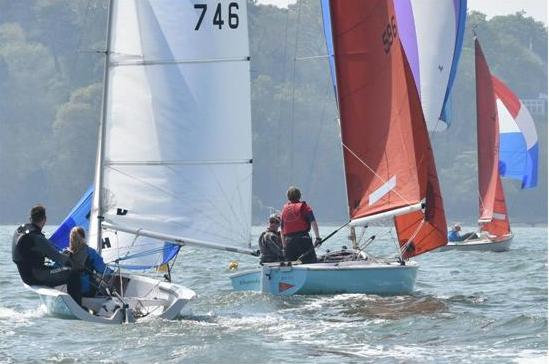 Having failed to get all classes completing a race this year due to lack of wind, both competitors and organisers scanned the cloudless skies at breakfast to see if the forecasted breeze would arrive. As it happened, a wonderful F3-4 from the east built and remained all day. In fact it created a perfect race wind, without gusts or fluctuation in direction.

The cruiser class got off in time to see Sanity nail the start on a beat towards Bob Kemp and Ryde Pier. Mad Hatter was delayed at the start un connecting a leeward mark and taking on more crew.

The squib and fast handicap classes enjoyed the classic triangle sausage course which was shortened after the first triangle of the second lap and an hour 10 minutes of sailing. The Squib lead changed 3 times not least because the 'wing mark to leeward' leg was not quite a shy spinnaker reach and this sewed confusion and slowed the lead boats. Ian Morgan in Incognito took advantage of this for the win.

The fast handicap fleet were a mix of RS400's and 100's, and lasers in various rigs. The starts were competitive with 8 boats on the short line with speed (Tom White OCS laser on the second race on the pin end). The triangle legs were processional by volume of sail but the down wind leg of the sausage gave options to play the angles in the slack tides. The sight of the boats planing down wind and the smiles on the faces showed it was a good day to be on the water.

For the second race of the Bank Holiday series the race team shortened the distance to the windward mark and moved the wing mark to windward. This kept both the Squib fleet close and allowed the RS400 to over take them although they started 5 minutes later. As the tide grew the windward legs became more predictable, beating up the shore out of the current, leaving the only opportunity for change of positions on the downwind legs and at the mark roundings. Niel Griffiths is winning on the fast handicap series results so far and Harry White and Tim Farley sailed well to get 2ndand 3rdwith their laser rigs.

The slow handicap fleet of 2 enjoyed a sausage course of 2 laps. The second race start was very close and if Charlotte Andrews had called starboard she would have gained the advantage on the larger and faster competitor

It was an excellent day for racing, let's hope the winds are fair going forward into the rest of the season.