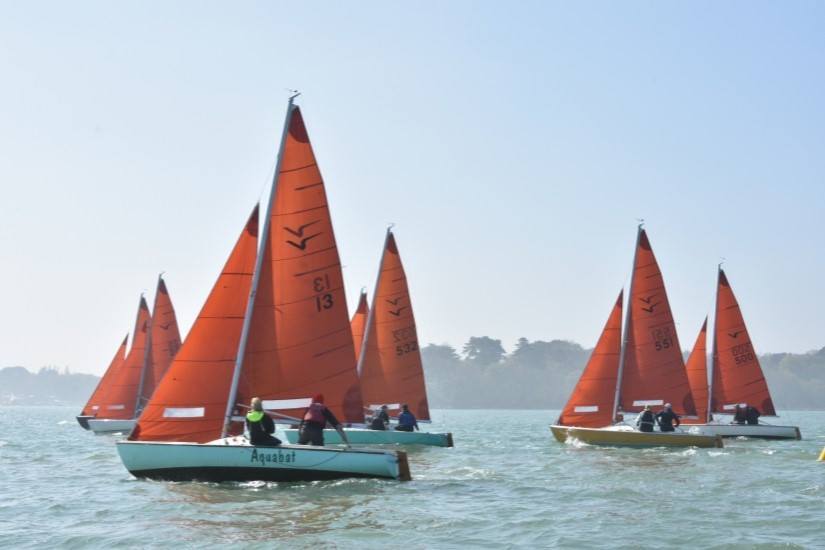 Over 30 competitors and 3 classes (7 Squib, 9 fast handicap and 2 Oppies) set out for an 11am start on a falling & neap tide in a light northerly (1-10 knots). The Race office team had been asked to organise 2 races (IA 5 & IA6) to make up for previous races lost within the Island Ale Series. This meant that the races had to get off like clockwork to get everyone round before low tide. This all assumed that the wind would play fair.

First out were the Squib class beating to their laid windward mark with the tide. The fleet split between port and starboard sides of the course trying to hunt down an advantage but the Gibsons, who were to be dominant on the whole day, reached the mark first before heading in shore to Woodside. The rest of the fleet bunched on this second spinnaker leg and though the Emma and Class Captain, Sam Prime, got out in front of the rest, it was a relatively close race.

The second race started with the Gibson boat holding out Buccanneer at the the box end which left them a lot to do on a similar triangle and sausage course. Having bought the windward mark closer to the start line and compacted the course, it was assumed that this would allow a finish in a reasonable time. Howevever, after the wind dropped to near zero knots the fleet scattered across the course in the attempt to find the wind first. It made for some interesting manoeuvres at the leeward mark, before and notably, Steve Warren Smith pipped Andrew Porteus on the line, much to the delight of one and frustration of the other.

The fast handicap starts were competitive with Mathew Bamber showing great technique to keep from OCS by a whisker. Their first race was sausage 'course 4' and both port and starboard tack were used to get to the windward mark for the first 2 boats. As expected the larger Fast Handicap sailed by Christopher Andrews dominated the races for line honours with it's superior sail area and ability to make distance in the light airs. The second start was equally well contested and followed the triangle sausage course of the Squibs. Due to the timing of the light wind, the fast handicap caught up with the Squib fleet which made of a hectic slow motion course especially at the leeward mark. Special mention needs to go to Harry White who sailed 40 minutes after most of his peers had retired, to finish. This showed admirable determination in difficult conditions.

The Evan's boys were the Oppi fleet and their 'course 4' windward leeward race was well contested especially in the second race where they were only a boat length apart for a long time. With such well turned out boats and attention to rigging, this is the future of the club.