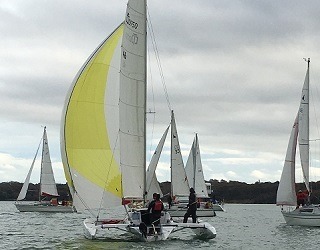 Near perfect conditions greeted the healthy fleet of 24 boats that turned out for the fifth race in the series last Sunday, with a NE breeze blowing a steady force 4 all morning. The cruiser fleets were first away, and again it was Hilary Martin's Seal Lesa that got the best start, only a rubbing strip shy of the line as the gun went. Over a 9-mile course it was always going to be line honors to Nigel Talbots well oiled team (Chris Rickman and Richard Rae) in his Farrier 24 trimaran Nitric, but only second on corrected time. First on handicap, and their first win of the series, was Ian Murray's Catalina 320 Luella, while Lesa again led the closely matched fleet of Seals to take third, Chris Turner fourth and Marks Weeks and Way piping Kev and Marley Gibson for fifth spot.

Next off were the 8 Squibs; all favouring the Committee end in the strong ebb tide. Scott and Charlie Holdstock in Jess got the best of it, and also picked the perfect lay line to have a healthy lead by the windward mark, while Chris and Ben Gibson (Wizard) and Sally Everett and Julie Prime (Firestreak) gave chase behind them. There was a certain inevitability as the Gibson boys first and then Firestreak overhauled Jess, while Martin Harrison (Hussar) also moved forward over the next two legs. A certain amount of confusion ensued on the second lap as David Longford's navigation went awry on board Kestrel, but ultimately Hussar finished second behind the Gibson's, with Firestreak a creditable third, all separated by less than two minutes over a 90 minute race.

The 8 fast dinghies were set a similar but shorter triangle/sausage course by Race Officer Sandra Brown and like the cruisers it was the multihull (Dart 15) of Simon Giles, who had line and in this case, handicap honours. Making a welcome, and well rewarded, return to the race course was Alex Downer, who took second place in his somewhat underpowered Laser 4.7 while the White boys, also in 4.7s did their usual battle with the bigger RS400s. This time it was very exciting as, after being swamped by them off the line, Harry made a great comeback and for the first time this year, a complete tie for a podium place ensued, both Harry and the RS400 of Neil Griffiths and Mark Turner having a corrected time of 45 minutes 19 seconds!

Cameron Blamey was unchallenged in the Oppie race and carried off another win. All in all, 23 boats and 38 sailors took part in what is always a rewarding and challenging series, and with two more races to go, there is all to play for before the final placing's are confirmed on 18 December.