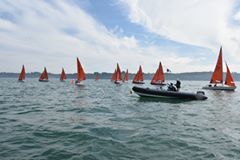 On a shifty Northerly force 2-3 (and with the occasional whole) the RVYC had good racing from all classes. The Seals in the Cruisers class nailed the start, with Lesa (Hilary Martin + Rob Fraser) half a nose ahead of the single handed Seals of Mymo (Mark Weeks) and Elsa (Chris Turner), and the Trimaran, Sanity (Nigel Talbot & Richard Rae) hot on pursuit. Peal Wreck, Regatta Lets, Leeward, Woodside, Line made an interesting course which Sanity completed in 40 minutes and Lesa winning on handicap.

Race Officer Neil Griffiths and the rib team set a competitive triangle-sausage course for the Squib Class which led to a lot of position changing in their largest fleet since September. Long-time-gone returner Vivacious (Peter Donaldson and Amy O'Regan), bossed the start but saw Rhapsody (Steve Warren Smith and Benita) make the windward mark first. The first reach tested the lead seeing Kestral and Lee Deck over taking Rhapsody. In the end Lee Deck (Martin & Anne Harrison) took line honours by some distance followed by Rhapsody .

Chris Andrews and Steve Sheridan won the fast handicap in a fleet of 5 and the ever present Charlotte Andrews sailed the course to take the series points by herself in the Slow Handicap.

The number of boats on the water and the noise at the bar after, seem to be growing. See you all on the 1st December for Frostbite 8 + Cruiser 7.